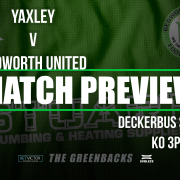 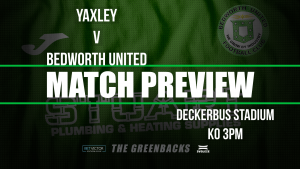 Saturday sees Bedworth travel up the A14 to Yaxley.  Yaxley currently sit unlucky 13th in the southern central league division 1 having played 12 Games with a record of 5 wins 1 draw and 6 losses and a tally of 16 points 2 Points and 2 places are all that separate the 2 teams but The Greenbacks have played 2 more games.

Yaxley’s season so far has been a tale of 2 halves, their home form has been by far better than their away with 4 of their 5 wins coming on home turf.  Yaxley’s ground (The Deckerbus stadium) has a 3G pitch much like our own at The OVAL and it makes you wonder if this is a factor in their form.

Bedworth come into the game off the back of a 2-1 home result against Kempston Rovers where they controlled the game for long periods and deserved to win by a larger margin than just the 1 goal.

Stuart Storer will have close to a full squad to choose from, Ricardo Dudley who missed last weeks game is available and Dan Preston is returning from suspension after his red card at Aylesbury 2 weeks ago. Both players will be in contention for a place in the starting 11 but after last weeks performance by they will have their work cut out to get their hands on that coveted green shirt on Saturday.This will be the first time that Stu Storer has took a side to Yaxley in his time in management so it will be new territory for him and his management team.

The Greenbacks will be looking at the next couple of games to push themselves up the league and start to compete for one of those coveted playoff positions at the end of the season.  If The Greenbacks have playoff aspirations then these are the games that they need to look at winning.

For those travelling tomorrow the Address is: