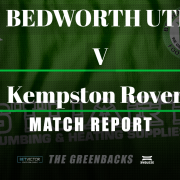 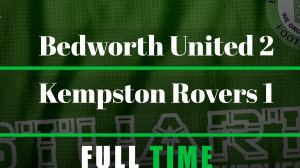 Bedworth started the better of the 2 teams and broke the deadlock when Mitch Piggon met an Alex Troke cross to head past Knox in the Kempston goal to give Bedworth a deserved lead.  Bedworth looked like the team more likely to score the second goal but for all their endeavour the final ball was just lacking.  It looked as if the Greenbacks were going to go in at the break only one goal to the good in the 1 minute added on time it was Alex Troke who popped up at the far post to fire through Knox legs into the net to double the Greenbacks lead at the break.

The second half started with Bedworth carrying on where they left off the first on the front foot but could not add to their lead. Kempston got themselves back into the game on the 75th minute when a square ball from Gorman found Newman who got a touch lucky when Parrott slipped on the slick surface before he could get to the man and Newman duly used the space this created to despatch the ball past Crane who was wrong footed by Parrotts slip.  Rovers goal sparked them into life and Crane who had been a virtual spectator all game was called upon to make a fine save from close range.  With time ticking down Kempston started to lose a bit of discipline and this led to their task became even harder when Brennan in frustration threw the ball into Pryces face which saw referee Ashley Clarke brandish a straight red card and leave Kempston with a mountain to climb with only 5 minutes remaining.  After Lynus King was fouled Kempston keeper Knox tried to drag him to his feet which caused a bit of handbags and saw Knox receive a yellow card for his part.  Unlike in a few recent games Bedworth managed to see the game out until the final whistle, keeping all 3 points at The Oval and lifting the Greenbacks up to 11th in the table and leaving Kempston still in the bottom 3.