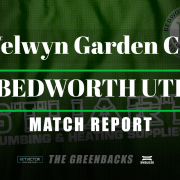 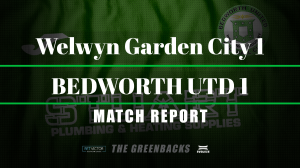 Bedworth travelled the 83 miles to Welwyn Garden City to face a team sitting fifth in the league that have only lost one game all season.  Stu Storer made 2 changes from the side that beat Wantage in the last league game, with Luke Rowe coming in for Josh Steele and Ricardo Dudley coming in for the absent Dan Preston who was missing due to illness.

Bedworths started by far the better of the 2 teams with Rowe putting in a dangerous cross that was well claimed by the Welwyn keeper.  Troke had a weak shot after good work from Piggon,  Bedworth did take the lead shortly after when Blythe lobbed a ball forward Piggon flicked on for Bailey-Nicholls who one on one with the keeper who brought him down giving the ref an easy decision to point to the spot.  After a long pause in play whilst the referee was waving away appeals for the Welwyn keeper to be booked Troke stepped up and placed the ball to the keepers right to give the Greenbacks the lead.  The goal seemed to spark Welwyn into life and they started to get a foothold in the game forcing Crane into action to claim a couple of crosses but nothing to dangerous.  Up the other end Bailey-Nicholls had another appeal for a penalty waved away. It was Welwyn though that got on the scoresheet 8 minutes after Trokes penalty, when a poor clearance from Crane was picked up on the right the cross came in was collected by the Welwyn number 9 who shot from a tight angle Dudley cleared the initial shot of the line and was looked to have been caught late the ball looped up for Olamenu to head over Templeton on the line to level the score despite the Bedworth protests.  The rest of the first half was played out with neither team really exerting much pressure or getting a foothold.  Welwyn did have two players booked in the first 45 minutes one for being a little to vocal towards the referee and one for leaving the field of play to change his boots without permission.

The second half pretty much followed the first with Bedworth being the stronger in the early stages Welwyn coming into the game midway through the half then Bedworth exerting their authority in the last 10 minutes.  Neither team really tested the oppositions keeper Crane did well claiming a few crosses, Troke had a couple of half chances which didn’t trouble the Welwyn keeper, Blythe had a shot from distance but the game ended all square.

Listen to what Stuart Storer had to say after the game