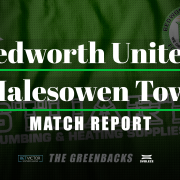 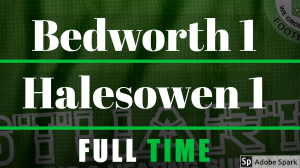 Bedworth faced Halesowen at the OVAL in both teams first foray into the FA Cup this season. Bedworth made 1 Change from the 11 who started in the defeat to Barton Rovers midweek with Reece Blackmore coming in for Charlie McConnachie.  With the weather being so warm it was going to be tough going for both teams.

The first half started as a very cagey affair with neither team really getting time on the ball and most of the game being played out in the midfield with neither keeper being really tested. It was Halesowen though who broke the deadlock when a low cross from their left was met at the far post by Molyneux on the half hour to give the visitors the lead, Bedworth kept on plugging away for the remainder of the half but the Halesowen back line stood firm for the remainder of the half to maintain their lead at the half time whistle.

If the first half was a little short on talking points the second more than made up for it. The half started with Halesowen having a significant amount of possession in the first 15 minutes testing Harrison on 2 occasions the first a shot from distance which he kept out and claimed at the second attempt, the second he showed his bravery coming out at the feet of the goal scorer Molyneux to prevent him getting his second of the game. With 15 minutes played Dudley challenged for a ball and as the player come down on top of him his elbow caught Ricardo just above the eye opening up an inch long wound that has since require hospital treatment. This meant that new signing Cal Templeton was brought on to make his first appearance in a Greenbacks shirt.

With the clock ticking both teams started to give away a lot of free kicks probably a lot of ot down to tiredness in the strength sapping heat. Both Fitzharris and Rowe picked up yellow cards in quick succession for adjudging to have fouled their opposition.

Bedworth knew that a goal was needed to keep the cup dream alive and went on the attack bringing on the more attacking Bailey-Nichols and Pryce for Blackmore and Fitzharris which whilst gave more attacking impetus would leave us susceptible to the counter the next goal would be crucial. It was the Greenbacks though who scored when Chester won a corner on the right, The ball was delivered into the box where it was met by Troke who’s header was too powerful for Bunn in the Halesowen goal who couldn’t prevent it hitting the back of the net even though he got a hand to it. With 5 minutes to go though events weren’t finished as Rowe saw red for his second yellow card of the game. Halesowen brought on Lee Hughes who’s last visit to The OVAL was a lot more different having gone in goal after the Halesowen keeper was injured and keeping a clean sheet. This time though his day wasn’t as enjoyable as when in the final minutes he could of been the hero for the Yeltz when he got through but his shot was weak and easily saved by Harrison to keep the score all level at the final whistle.

After the disappointment of mid week everyone I am sure would have been happy to get a draw against one of the league favourites. It now means that the scheduled league game against the same opponents at The OVAL will be postponed to a later date and the FA cup replay will be held at Halesowen on Monday instead kicking off at 3pm